The gibson sg is one of the classic blues rock guitars of the 60ties and 70ties. Used by players like Duane Allman, Eric Clapton, Angus Young, Pete Townsend or Tommi Iommi. In this episode of stuff that’s gone we will look at a gibson sg custom from 1969. These guitars can be great playing and sounding bargains, when the players is able to cope with the narrow nut width.

This guitar is the top of the line example of the sometimes called sg type 2 built from 1966 until 1971. This model is characterized by the following features:

The story of this guitar is a perfect example of how you can admire things, you never cared for. When I bought the guitar my motivation was to save this guitar from being robbed her original parts and sold separately for a better deal. The guitar was 95%-original but because of the issues this guitar was a real bargain. The main issues/alterations were the following:

In practice this guitar was my preferred gibson guitar for approximately 2 years. Great tone from all three pat-no pickups, versatile because of the pickup blending, light weight and with good playability.

Another story we can learn from this guitar is the difficulties dating an end 60ties gibson guitar. The guitar was sold to me as an 1967. But a closer inspection of the features revealed the original date of birth in early 1969. The relevant features are the following: 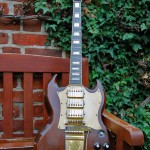 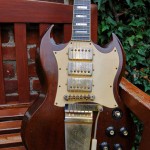 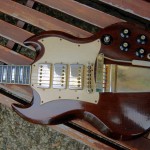 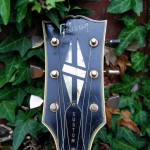 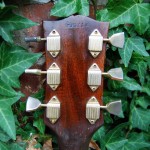 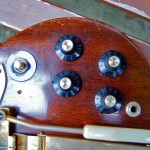 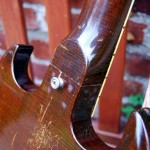