The Fender amps with a brown outfit were manufactured between 1960 and 1963, just after the tweed models and before the blackface models. They definitely have a sonic footprint of their own – falling roughly half way between the tweed and blackface models. Let’s have a look at a classic Fender Super Amp from 1962.

“Brown Fender amps are generally cleaner sounding than tweeds at comparable volume settings, and they posses a more subtle attack with less high frequency emphasis and power than the blackface amps…A few knowledgeable cyber-surfing amp gurus have even begun to call them the best sounding amps Fender ever made.”

This specific amp had a complete overhaul and some modifications done over time (see the holes in the back panel) which have been reversed. The basic features of this model (6G4-A) are:

The output transformer is changed (this is a general problem with this types of amps) and an additional 220 Volt step-down transformer is installed. Basically this is a rare brown fender vibroverb without the reverb but with a complexer and different sounding vibrato. What really makes this amps special for me is the swampy sounding vibrato, which was only used in this type of amps. A Fender Tube Reverb Unit (reissue or original) refines the tone and adds flexibility to this amp.

“This is one that some called the best Fender amp ever. It has cool tremolo in a compact 2×10…it will have the same tonal attributes as its big brother [the Concert] in a package more players might find useful – still loud, but more club-friendly.” 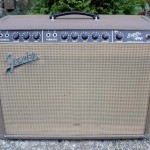 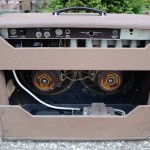 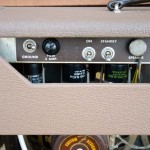 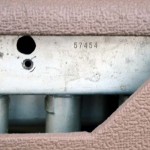 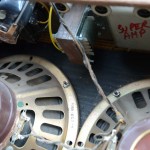 A lot of additional information concerning Fender (Super) Amps can be found here: